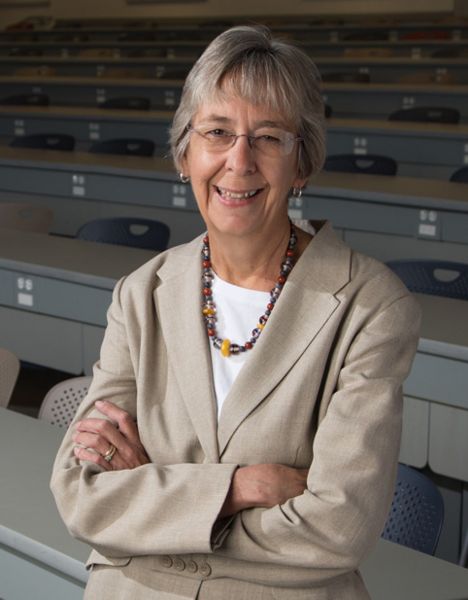 Dr. Christine Hailey was named Dean of the College of Science and Engineering on July 1, 2016. She earned her B.S. in Mathematics from Colorado State University and her M.S. and Ph.D. in Mechanical Engineering from the University of Oklahoma. She is also a licensed professional engineer.

Upon completion of her doctorate, Dr. Hailey joined the technical staff at Sandia National Laboratories in Albuquerque, NM, where her early work focused on modeling high-speed water entry. She was promoted to Manager of the Parachute Technology and Unsteady Aerodynamics Department and provided technical leadership in the Parachute Laboratory. Dr. Hailey joined the Department of Mechanical and Aerospace Engineering at Utah State University as a tenured faculty member in 1994. In 2001, she was appointed as department chair of the Mechanical Engineering program at the University of Texas at Tyler and provided leadership in the development and accreditation of the program. Dr. Hailey returned to Utah State University in 2003 and served as Senior Associate Dean in the College of Engineering and Professor of Mechanical and Aerospace Engineering. She was named Dean of the College of Engineering in 2013.

In 2016 she accepted the position of Dean of the College of Science and Engineering at Texas State University and relocated to San Marcos, Texas.

Dr. Hailey has been PI or Co-PI on over $15M in externally funded grants. She was the Principal Investigator of the National Center for Engineering and Technology Education, an NSF-funded Center for Learning and Teaching. The National Center for Engineering and Technology Education (NCETE) was a large-scale collaborative network of scholars with backgrounds in technology education, engineering, and related fields. The mission of NCETE was to build capacity in technology education and to improve the understanding of the learning and teaching of high school students and teachers as they apply engineering design processes to technological problems. She was the Principal Investigator of an NSF-funded project entitled “The Influence of MESA Activities on Underrepresented Students.” The Math, Engineering, Science Achievement (MESA) outreach program was selected as the subject of this study because of its forty years of experience in introducing engineering to students traditionally underrepresented in the discipline. She is the author or co-author of over sixty publications and proceedings.

Dr. Hailey received the Utah Governor’s Medal for Science and Technology in 2016 for her efforts to recruit and retain undergraduate and graduate students in engineering, especially women. She is a recipient of the College of Engineering Teaching Excellence Award, the Utah Engineers Council Engineering Educator of the Year Award, and the Society of Women Engineers Distinguished Engineering Educator Award. She was elected to the Engineering Accreditation Commission of ABET which is the accrediting organization for applied science, computing, engineering, and engineering technology programs.